This week’s update comes from Jon Pope in our cash management team.

Whilst the world’s attention is clearly on the human cost of the horror in Ukraine, both the US and UK Central Banks met last week to decide whether the economic implications of the war should alter their plans. In the event, both committees decided to raise interest rates by 25 basis points, as markets expected, but there were some slightly nuanced differences between how the committees view the outlook.

The UK’s Monetary Policy Committee (MPC) voted 8:1 to increase rates to 0.75%, which returns official rates to the level they were prior to the pandemic. This is the third consecutive meeting where the committee has decided to raise interest rates. A subtle difference this month was that the dissenting voter, Deputy Governor John Cunliffe, wanted to leave rates unchanged. At the last meeting, the minority voters all wanted to increase rates by 50 basis points. The language used in the accompanying statement was also slightly more restrained, rather than saying that further tightening was ‘likely’, they instead said that it ‘may be appropriate’.

Markets had been expecting a series of additional rate rises in the UK over the course of the year, but the MPC appears to be concerned that even higher near-term inflation – its forecasts now expect a peak of 8% in the second quarter of the year – will add to the cost-of-living squeeze, to the extent that it will materially affect consumer spending and economic growth and so mitigate the need for significant rate rises. Market reaction, post the decision, was therefore to continue to factor in another rate rise at the May meeting but expectations for additional rate rises in the second half of the year moderated slightly. 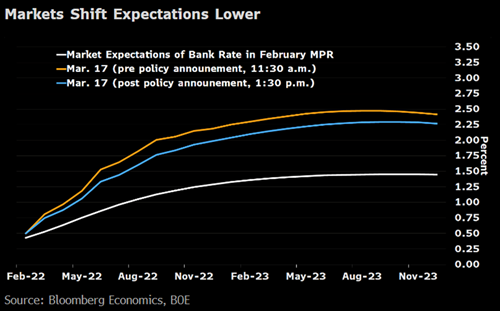 By contrast, in the US, the majority of the Federal Open Markets Committee (FOMC) voted to raise rates by 25 basis points but the only dissenting voter wanted a 50 basis point rate rise. The accompanying ‘dot plot’, which provides an estimation of how committee members expect to vote in the future, was more aggressive than some had expected. The median of the expected votes suggested seven 25 basis point increases this year and four next year. It also suggested a strong bias towards one 50 basis point rise this year. On first reading then the FOMC is expecting to have to react to inflation more aggressively than the MPC.

Of course, it is important to remember that this is the first rate rise this cycle for the FOMC whereas the MPC is already some way down their path. Some think that the FOMC is already behind the curve and so the language used was perhaps intended to send a firm message that it is serious about taming inflation.

Market reaction to the US move was limited, communication from the FOMC has been clear over the last few months that they would raise rates at this meeting.

The outlook for all economies is highly uncertain at the moment. Continued conflict is likely to put upward pressure on inflation and dampen economic growth. Raising interest rates into a period of slowing economic growth is a difficult decision, which neither UK nor US Central Banks have had to make for many years. Unless we see an improvement in the inflationary outlook, it may mean either accepting inflation will run a bit hotter than preferred in the short-term or sacrificing economic growth – or even triggering recession – in order to deal with it.