In light of Saturday’s tragic incident in Jersey, which followed the accident at sea last week, our weekly update was delayed until today. Our teams in Jersey, Guernsey, the Isle of Man and the UK would like to offer their condolences to all those affected.

Our penultimate weekly update for the year is written by Charlie Carpenter, who is in our advisory team in Jersey.

He’s making a list; he’s checking it twice… but does Santa cause a rally when he comes to town?

The Santa Claus rally is a phenomenon that was first identified by renowned investor Yale Hirsch, following the S&P 500 consecutively showing above-average returns during the month of December. 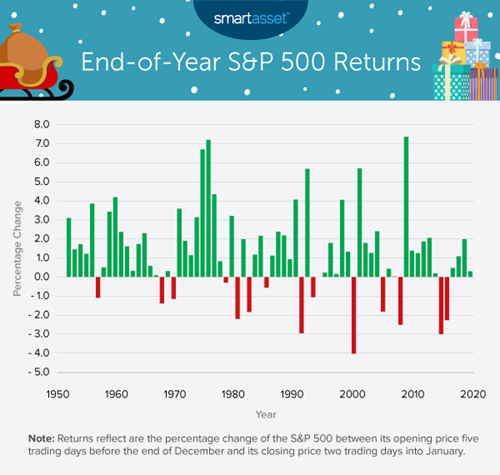 Closer to home, the average market return for the FTSE 100 since 1996 also statistically shows December as a month of higher-than-average returns.

The question is, can investors expect a Santa rally this year, especially against the backdrop of dire economic conditions? Is it something to bet your Christmas presents on?

While the above charts make a compelling visual, it is important to remember that they show average returns, and not every December delivers positive returns.

Many traders, economists and punters have put theories forward to support the Santa rally. Retail investors full of Christmas spirit, feeling bullish, and pushing stock prices up; a Christmas bonus burning a hole in the pocket of investors; an increase in retail spending or maybe large institutional investors shoring up their books and positions before the end of the calendar year.

Notwithstanding the proposed theories, 2022 feels a little bit different with the cost of living rising, the standard of living falling, and corporate institutions tightening the purse strings.

We started the year full of optimism with the pandemic seemingly behind us, but it wasn’t long before the world faced a new challenge. While many hoped the markets would enjoy a period of relative stability, in February Russia began its ‘special military operations’ and started its invasion of Ukraine. This resulted in a suite of sanctions being imposed on Russia from the West and in retaliation Russia used its energy exports as a bargaining chip, causing a spike in energy prices.

At the same time, inflation was on the run and central bankers were describing the high inflation prints as transitory, brought on by supply chain bottlenecks as the world tried to return to normal. This was exacerbated by the high level of quantitative easing used by central banks to stimulate the economy during the pandemic.

As inflation prints kept rising, central banks tightened monetary policy and increased interest rates consecutively throughout the year in an attempt to calm inflation. The increase in interest rates coupled with the increased volatility across the globe saw billions leave the market, as investors opted for ‘safe havens’ or parked funds in cash thanks to higher interest rates which can generate near risk-free returns.

So, while we keep our fingers crossed that Santa Claus will come to town, a perfect economic storm has seen global market fall throughout 2022 with the MSCI World Index down by 14.12% year to date1.

Nevertheless, there are reasons to feel Christmassy; it is forecasted that inflation has peaked2 and as it starts to cool central banks will pivot to become more dovish. This should lead to interest rates being more stable and increasing confidence in the equity markets. Hopefully, 2023 will see a de-escalation in Ukraine, and as the reliance on Russian energy is decreased, alternatives become cheaper. It is also forecasted that in 2023 supply chains will return to pre- COVID 19 levels as supply bottlenecks dissipate3.

Although it would be nice to end the year with a Santa rally, it should not change an investor’s strategy and an advisor should definitely not base an investment decision on the chances of a rally in December. Timing the market is notoriously problematic, therefore the best way to experience any sort of rally, Santa or otherwise, is to stay invested in the market.

Next week will be our final weekly update for 2022. Until then, we wish you a good week! 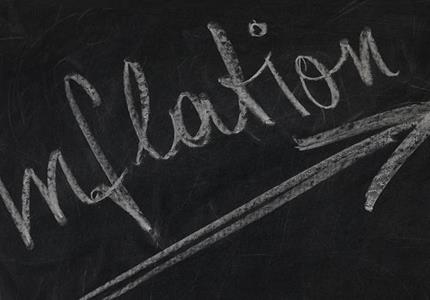