This update comes from Robin Newbould, who looks after precious metals at BullionRock and helps out a bit with execution, advisory and market making at Ravenscroft from time to time.

Whilst he was very excited to be given the last review of October (presuming that Brexit would be ‘done’ and an outcome of the talks between US and China known) he has opted, in protest, to leave both topics out of the below altogether. Devil's advocacy is included, however.

Who would be a forecaster these days? I mean, of anything. But, if you’d like me to be more specific, I was thinking, perhaps unsurprisingly, of those trying to predict what's going on in the financial markets.

As I searched for the BBC-esque weather icons for this week’s piece, I was immediately reminded of the Michael Fish incident on 15 October 1987 when, a few hours before the catastrophic storm in the UK broke that night, he said during a forecast:

"Earlier on today, apparently, a woman rang the BBC and said she heard there was a hurricane on the way. Well, if you're watching, don't worry, there isn't!"

The storm was the worst to hit South East England for three centuries, causing record damage and killing 19 people.

It was not the only disaster of that month of that year, as it happens. Whilst nobody died the following week (as a direct result, at any rate, I don’t think), global financial markets were subject to a sudden, severe and largely unexpected shock, with major indices, the FTSE100 and S&P500 included, falling more than 20% in a matter of days, commencing on the now infamous “Black Monday” of 19 October 1987. 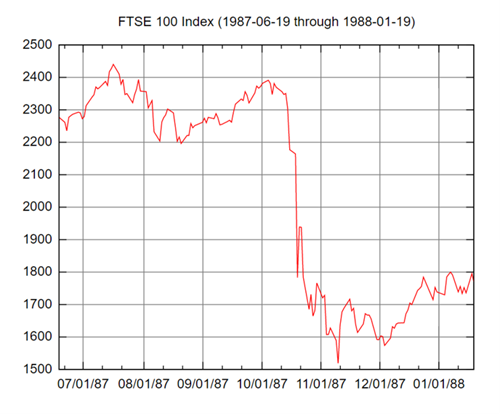 In relation to current markets, it’s hard to tell whether the outlook is sunny and fine, or cloudy with the risk of thunder. On the one hand, we have stock indices at all-time highs: witness the S&P 500 hitting a remarkable 3,040 as I type this evening. Furthermore, according to a report written this week by John Butters, Senior Earnings Analyst at FactSet:

So great news, right? Erm, yes and no. You see, the report goes on to reveal that:

So are we to infer that this means that businesses are performing worse, but that their share prices have never been higher? In a word, yes. In a chart, this: 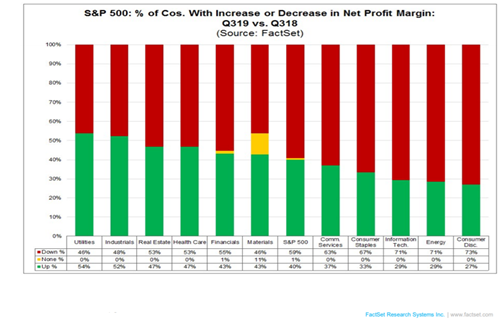 But does it even really matter anymore? I once, quite indirectly and some time ago, worked for a Mr Terry Smith (now of Fundsmith fame). During one of his visits to Guernsey, he spent some time in our dealing room and I was quizzing him about (what I considered at the time to be) high equity valuations, when he said, "All you have to do in a bull market is disengage your brain."

Back to today, and in the case of European equities, not only are earnings estimates falling, but when companies are missing those reduced targets, their share prices are still going up! See below, from a Deutsche Bank report issued last week. 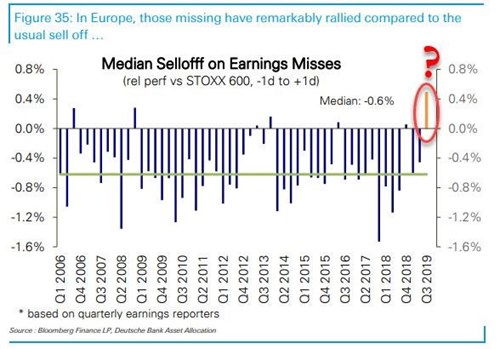 Even German bank financial analysts, not well known for their crazy sense of humour, have had to resort to calling this phenomenon “remarkable.”

How on earth do we try and make sense of this? I was about to write something like the following, when I stumbled across just the right words in a recent post on ZeroHedge, which noted that the period since the global financial crisis in 2008 could represent:

“... a decade during which markets [have] learned that economic data is irrelevant in a time when central banks are injecting trillions in liquidity and corporations are issuing trillions in debt to repurchase trillions in stocks pushing [them] to all-time highs ... "

So my final thoughts turn to trying to consider what will happen to central bank asset purchases in the future and how and when this almighty game of musical chairs might, if ever, actually stop... and furthermore what would happen if it did. The last infographic comes from Schroders, and is well worth following this link and a scroll through, I promise.

Enjoy your week one and all ... and do let me know if you want to buy any (gold or silver) coins to toss to help with your own forecasting!

This week’s update comes from our advisory investment team in Guernsey.

This week’s update comes from our investment team in Jersey.